Welcome to Ha’Azinu (Listen/Give ear), this week’s Parasha (Torah Portion). We know you will be blessed as you join us in reading this portion of Scripture. It is the last one in the annual cycle to be read on a Shabbat (Sabbath). 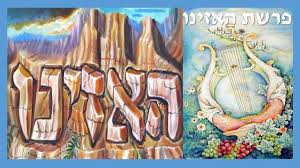 The concluding Torah portion of the annual cycle, V’Zot HaBerachah (And This is the Blessing), will be read on Simchat Torah.

Last week, Parasha Vayelech concluded with Moses foreseeing that Israel would turn away from their covenant with God, causing Him to hide His face from them. Still, Moses promised that the words of the Torah would not be “forgotten out of the mouths of their descendants.” (Deuteronomy 31:21)

Moses gathered the people together to listen to a shir (song) called Ha’Azinu (Listen). That song would always be a reminder of the consequences of turning from the Lord.

This week’s Torah portion (Parasha), which is called Ha’Azinu, consists primarily of the 70-line song that Moses sang to the people of Israel on the last day of his life.

At the end, God commands Moses to go up to the top of Mount Nebo to catch a glimpse of the Promised Land before being “gathered unto His people.”

“Yet you shall see the land before you, though you shall not go there, into the land which I am giving to the children of Israel.” (Deuteronomy 32:52)

Moses is allowed to see the land, but not enter in. It is a devastating disappointment and, yet, he ends his public life with a song. What is the nature of this song? It begins by describing God’s lovingkindness and faithfulness toward Israel, and it ends with a promise of vengeance, redemption, and atonement for God’s land and people.

“Rejoice, O Gentiles, with His people; for He will avenge the blood of His servants, and render vengeance to His adversaries; He will provide atonement for His land and His people.” (Deuteronomy 32:43)

It is not only the people of Israel who will rejoice with this final redemption. The Gentiles will rejoice together with God’s people.

God’s salvation is for all people, of every tongue, tribe, race and ethnic background. All people, Jews and Gentiles, can rejoice together in unity at the goodness of God.

A portion of this song has severe words of rebuke against Israel for infidelity and unfaithfulness to God. Not only would God “hide His face” from His people but He would also render judgment.

“I will heap disasters on them; I will spend My arrows on them. They shall be wasted with hunger, devoured by pestilence and bitter destruction; I will also send against them the teeth of beasts, with the poison of serpents of the dust.” (Deuteronomy 32:23-24)

Although these rebukes seem quite harsh, they reveal that the discipline of God is for our good and will ultimately end in our final redemption.

Provoking God and His People to Jealousy

Moses’ song foresees that the people of Israel will make God jealous with their worship of false gods and idols and that God in turn will provoke His people to jealousy with those who are called “not a nation.”

“They have provoked Me to jealousy by what is not God; they have moved Me to anger by their foolish idols. But I will provoke them to jealousy by those who are not a nation; I will move them to anger by a foolish nation.” (Deuteronomy 32:21; see also Romans 11:13-15)

This reference to not a nation is in Hebrew loh ami. It is found again in the Book of Hosea: “I will plant her for myself in the land; I will show My love to the one I called ‘Not My loved one.’ I will say to those called ‘Not My nation,’ (loh ami) ‘You are My nation’; and they will say,’ You are My God.’” (Hosea 2:23; see also Romans 9:25)

Who are these people who were once “not a nation” and are now God’s people?

These are the Gentiles who have come to join themselves with the commonwealth of Israel through the Jewish Messiah: “Once you were not a nation, but now you are the nation of God; once you had not received mercy, but now you have received mercy.” (1 Peter 2:10)

These are the very people who God has called to salvation to provoke Israel to jealousy.

“So I ask, did they stumble in order that they might fall? By no means! Rather through their trespass salvation has come to the Gentiles, so as to make Israel jealous.” (Romans 11:11)

What will make the Jewish people jealous of these Gentiles? Isn’t it the other way around? Is it not the Gentiles who are jealous because God has blessed many Jewish people with material prosperity? These blessings seem to be the cause of at least some of the world’s anti-Semitism.

So when and how will the Jews become provoked to jealousy by Gentile followers of Yeshua (Jesus)?

It will be when they see the true love, joy, fellowship, and peace that these believers possess in Yeshua, even when the entire material world around them falls apart. Likewise, it was this ability to sing in the face of apparent tragedy that set Moses apart from the others.

All but a few of his generation had died in the wilderness because of their unbelief. Moses himself was about to die, having never entered the Promised Land. But he still praised God in song, reminding Israel of God’s power, love, and faithfulness.

The Rock and His Righteous Judgment

In his song, Moses uses the metaphor of God as a rock, steadfast, strong, immovable and unchanging. It is for these particular qualities that the Rabbis chose a verse from this Parasha as the opening line of the Jewish burial service called Tziduk haDin  (Righteous Judgment).

The prayer begins with Deuteronomy 32:4: “He is the Rock, His work is perfect; for all His ways are justice, A God of truth and without injustice; Righteous and upright is He.”

In contrast to all these wondrous qualities of God, the Torah portion describes man as corrupt, perverse, and crooked to the point of being compared to Sodom and Gomorrah.

“For their vine is of the vine of Sodom and of the fields of Gomorrah; their grapes are grapes of gall, their clusters are bitter. Their wine is the poison of serpents, and the cruel venom of cobras.” (Deuteronomy 32:32-33)

There is no way to bridge the wide chasm between the corruption of man and the holiness of God except for one, that narrow gate that leads to life is through Yeshua HaMashiach (Jesus the Messiah). He said, “I am the way, the truth and the life, and no one comes to the Father but through Me.” (John 14:6)

In addition to being compared to a rock, Moses also likens God to an eagle, a bird of great strength and vision, who took the children out of Egypt on His outstretched wings.

“As an eagle stirs up its nest, hovers over its young, spreading out its wings, taking them up, carrying them on its wings, so the LORD alone led him, and there was no foreign god with him.” (Deuteronomy 32:11-12)

Music and Vessels of Praise

Music has been called the universal language of the heart and, therefore, Moses uses the song of Ha’Azinu to complete his life’s mission with a stirring challenge to the people of Israel. What is Moses’ message?  It is that our actions have consequences, for good or for evil, and that our very survival depends upon our faithfulness to God our Rock.

Music and song have always been an integral part of the Jewish people.

England’s former Chief Rabbi Jonathan Sacks wrote, “Jewish life is a symphony whose score is the Torah, whose composer is God, whose orchestra is the Jewish people, and whose most moving performance is on Simchat Torah [Joy of the Torah].” (Torah with a Twist of Humor, Joe Bobker, p. 409)

We are all walking vessels or instruments designed to praise God with singing. It is good to remember that the singers and musicians were at times sent out in front of the armies of Israel, and this in itself was enough to bring victory.

Moses’ song has not been forgotten; it has been passed down from dor l’dor  (generation to generation).

The Levites sang it each week in the First and Second Temples. Later, after the destruction of the Temples, Jewish children were taught in religious schools to memorize the entire song.

Ha’Azinu reminds us that both God and His people suffer pain through betrayal and infidelity, but those who come to God in sincere repentance can receive forgiveness.

Moses, called “friend of God,” died alone and yet not alone, for his very best Friend in the entire universe remained with him even to the end. In fact it was God who buried Moses, and to this day He alone knows the burial place.