Welcome to this week’s Parasha (Torah Portion), which is called Eikev (Because). We are sure that you will  enjoy this portion of the Biblical Scripture that will be read during the morning services this Shabbat (Saturday) in all Messianic Congregations and Synagogues around the world.

“Because [eikev] you listen to these rules and keep and do them, the Lord your God will keep with you the covenant and the steadfast love that He swore to your fathers. He will love you, bless you, and multiply you.” (Deuteronomy 7:12-13)

Last week, in Parasha Va’etchanan, Moses predicted that the people in future generations would be exiled from the Promised Land and scattered among the nations because they would turn from God and worship idols. But Moses also foresaw that in the last days they would once again seek Him and obey His commandments.

The title of this week’s Parasha, Eikev, means because. It is used in this Parasha as a conjunction to create a relationship between experiencing God’s blessings and obedience to His Torah. In connection with this, the Haftarah portion this week contains an important prophecy that provides us with added insight into how to walk in the blessings of Adonai, through faith and obedience.

These three, faith, obedience, and blessings, are seen operating in our forefather Abraham, who first believed and then out of faith, obeyed God and was circumcised.

Abraham exemplified the concept that obedience is more than exercising our will over our own flesh; it is faith in action. Out of his faith flowed obedience to God.

In Genesis 15:6, we see that his faith was counted to him as righteousness, and the ancient Hebrew prophet Yeshayahu (Isaiah) beckons us to look to Abraham, our father of faith. We are to be like him; putting faith into action. Then we, too, will experience the blessings that flow from obedience.

Eikev: The Heel of Messiah

The word eikev comes from the verb akav, which means to take by the heel. Similarly, the Hebrew noun akev means heel, as in the heel of a foot. All of these words share the root letters ayin-kof-vet.

Ancient Jewish sages interpreted this dual meaning of ayin-kof-vet to refer to the generation of the “heels of Mashiach (Messiah).” 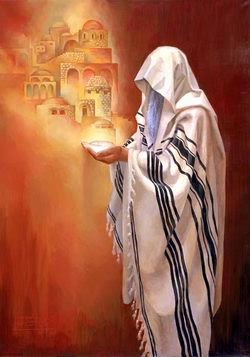 The last generation of the Exile is called Ikvata d’Meshichah or the Heels of Messiah, since that generation is expected to hear the footsteps of the Messiah. The word akev is first used in Genesis in an important prophecy: the seed of Chava (Eve) will eventually crush the head of the serpent.

“And I will put enmity between you [the serpent] and the woman, and between your offspring and hers; He will crush your head, and you will strike His heel [akev].” (Genesis 3:15)

This is the first Messianic prophecy in the Bible. From it we understand that the enemy would attempt to strike at the heel of the Messiah; instead however, our Messiah would crush the enemy’s head and destroy the works of the devil.

“The one who does what is sinful is of the devil, because the devil has been sinning from the beginning. The reason the Son of God appeared was to destroy the devil’s work.” (1 John 3:8)

In today’s climate of rekindled anti-Semitism, many consider it factually or politically incorrect to refer to Israel as the land promised to the Jewish people. The Word of God has no such limitation.

God is Lord of all the earth, but the land of Israel is unique among the nations; it is not like any other nation of the earth. It is a land that God cares for and watches over continually.

“The land you are crossing over to take possession of is a land of hills and valleys, which soaks up water when rain falls from the sky. It is a land Adonai your God cares for. The eyes of Adonai your God are always on it, from the beginning of the year to the end of the year.” (Deuteronomy 11:11-12)

In Parasha Eikev, Moses is continuing his closing address to the Israelites before they cross the Jordan River (which he began at the beginning of Deuteronomy). He tells them that if they are obedient to the Torah, they will prosper in the land they are about to conquer.

The people are to possess the land and not fear the nations living there because God would expel them.

Even today, Israel is not to fear the people in the land, for our God is with us to help us, just as He helped us in ancient times in Egypt and in Israel. Although Hamas and other terrorist organizations have engaged in brutal battles to take the land from the Jewish people, the soldiers of the Israeli Defense Forces bravely risk their lives to restore the security of the land given to the Jewish people.

While Israel’s enemies might vastly outnumber her, the Word of God promises that He will watch over her day and night. “He who keeps Israel neither slumbers nor sleeps.” (Psalm 121:4)

The plan to destroy Israel is of the enemy, and all those who make themselves God’s enemies will find themselves under the feet of Yeshua HaMashiach (Jesus the Messiah). (Psalm 110:1; Hebrews 10:13)

There are those who are not prepared to hear the Biblical truth that God has given the land of Israel to the Jewish people, but those who know their God will stand firmly upon the Rock of God’s Word.

Turning to the Source of Blessing

“I raise my eyes to the hills, from where will my help come? My help comes from Adonai, the maker of heaven and earth.” (Psalm 121:1-2)

In Israel today, the terrible struggle against terrorism has caused many of God’s people to turn their hearts toward Him as they search for help and victory.

Throughout the history of Israel, however, we see over and over again that when God blessed the Jewish people, many soon forgot Him as the source of their blessing and turned away from their devotion and obedience to Adonai.

God said of Gomer, the unfaithful wife of the prophet Hosea, “She doesn’t know it was I who gave her the grain, the wine and the oil; I who increased her silver and gold, which they used for Ba’al.” (Hosea 2:8)

We must always remember that when we prosper in the land that He gives us, it is God who is the source of our every blessing. We should never let pride rise in our hearts and think that our own abilities are the source of all that we have and enjoy. If we understand that what we have has been given to us by God, we are more likely to maintain an attitude of gratitude, and to be good stewards, using our blessings in a way that pleases God.

Each of us today should consider Moses’ warning to the people of Israel: “You will think to yourself, ‘My own power and the strength of my own hand have gotten me this wealth.’ No, you are to remember Adonai your God, because it is He who is giving you the power to get wealth, in order to confirm His covenant, which He swore to your ancestors, as is happening even today.” (Deuteronomy 8:17-18)

God gives us the power to get wealth in order to confirm His covenant. And though it is obedience that releases the blessings of God, He is not so much after our obedience as He is our hearts. True obedience begins with love for God and faith in His character.

Therefore, even more than the physical circumcision of covenant, which is of course important, God desires that each one of us be circumcised in our hearts. We cannot only change outwardly, putting on a show of religion, character, or purity; we must change inwardly, becoming soft, pliable clay in the Potter’s hands.

“Circumcise the foreskin of your heart; and don’t be stiff-necked any longer!” (Deuteronomy 10:16)

God promises Israel that the rewards of love and obedience are great. He will drive the nations out of the Promised Land and give the Israelites success against those who are more powerful than they.

If we will love the Lord our God and cling to Him and keep His mitzvot  (commandments), then He will faithfully care for us and protect us. What a wonderful assurance we have of His love.

“For if you will take care to obey all these commandments [mitzvot] I am giving you, to do them, to love Adonai your God, to follow all His ways and to cling to Him, then Adonai will expel all these nations ahead of you; and you will dispossess nations bigger and stronger than you are.” (Deuteronomy 11:22-23)