Welcome to our study of this week’s Torah portion, which is called Parasha  Beha’alotcha (When You Raise). This is the portion that will be read this Shabbat (Saturday) in synagogues around the world.

BEHA’ALOTCHA (When You Raise) 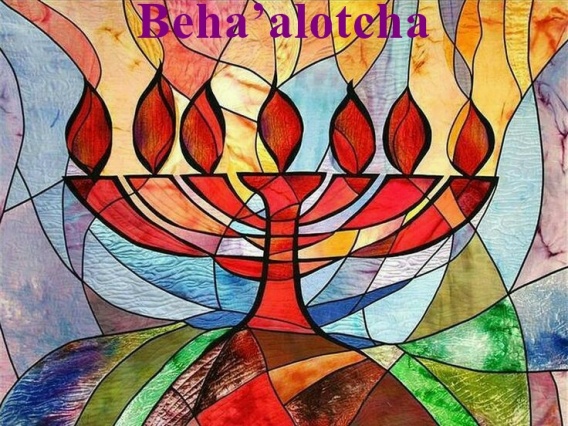 “Now the LORD spoke to Moses, saying, ‘Speak to Aaron and say to him, “When you set up (Beha’alotcha בְּהַעֲלֹתְךָ) the lamps, the seven lamps shall give light in front of the Menorah.”’” (Numbers 8:1-2)

Last week, in Parasha Naso, the numbering of Israel continued with a census of the Levites. The Nazirite vow was detailed, as well as the Aaronic Blessing.

This week’s Scripture portion is named Beha’alotcha, which means when you set up because it begins with instructions as to how the Menorah (lampstand) is to be set up in the Tabernacle. A related word is Aliyah (עליה), the Hebrew word for  immigrating to the Land of Israel. It can also be defined as the act of going up.

To take the step of faith to return to the land of our Forefathers (Abraham, Isaac, and Jacob) is an act of spiritual elevation.

The Menorah: Raising the Light of Purity

“Now this workmanship of the Menorah was hammered gold; from its shaft to its flowers it was hammered work. According to the pattern which the LORD had shown Moses, so he made the lampstand.” (Numbers 8:4)

Parasha Beha’alotcha opens with the lighting of the Menorah. This lampstand is a symbol of the light of revelation and truth. God commanded Moses to make it out of gold according to the pattern shown him on Mount Sinai. Why gold and not bronze or silver? Gold symbolizes something precious, of great value, and it is a metaphor for purity in the Bible. The fire in the Menorah represents the fire of the Divine Light spreading throughout the entire world, beginning with Israel.

We can understand it also as Godliness; therefore, the fire can be seen as symbolic of God refining His people so that they may be as fine gold!

“He will sit as a refiner and purifier of silver; He will purify the Levites and refine them like gold and silver. Then the LORD will have men who will bring offerings in righteousness.” (Malachi 3:3)

The Light of Obedience

Seven lamps were lit on the Menorah. Why are there seven golden lampstands and not five or nine or any other number? According to ancient Jewish thought, seven stands for perfection or completion.

God warned that He might remove the lampstand of a congregation if they continue in sin and refuse to repent. As Yeshua (Jesus) told the church at Ephesus: “I am coming to you, and will remove your lampstand out of its place, unless you repent.” (Revelation 2:5)

Those who are His followers continually grow in obedience, love, joy, and peace, becoming more and more like Yeshua. That love, joy, and peace shines forth through a dark and dreary world like a beacon of hope. It makes others desire the Source of that goodness.

“Delight yourself in the LORD, and He will give you the desires of your heart.” (Psalm 37:4)

As we pursue the Lord, we also pursue purity in our attitudes, our speech, and our ministry.

And so we read in this Parasha that the Levites who served God in the Temple had to be cleansed and purified before beginning their ministry.

“Then the LORD spoke to Moses, saying: ‘Take the Levites from among the children of Israel and cleanse them ceremonially. Thus you shall do to them to cleanse them: Sprinkle water of purification on them, and let them shave all their body, and let them wash their clothes, and so make themselves clean.’” (Numbers 8:5-7)

God took the Levites as His own in place of the firstborn who were spared during the Ten Plagues in Egypt. Most of those sons defiled their hearts and spirits when they worshiped the Golden Calf. The Levites didn’t worship the calf. They stayed faithful and true to the God of Israel; therefore, they were given the work of service in the Tabernacle, instead of Israel’s firstborn sons.

Murmuring in the Wilderness

“The manna was like coriander seed, and its appearance like that of bdellium. The people went about and gathered it and ground it in hand mills or beat it in mortars and boiled it in pots and made cakes of it. And the taste of it was like the taste of cakes baked with oil.” (Numbers 11:7-8)

In Parasha Beha’alotcha, the Israelites resume their trek to the Promised Land. The Divine fire-cloud accompanies them as a supernatural manifestation of God’s presence.

It has been a year since He delivered His chosen people from bondage in Egypt. They saw the River Nile turn to blood and their firstborn saved by blood. They even walked through a parted sea into safety. But experiencing God’s supernatural presence and His provision of manna did not stop them from murmuring in the wilderness.

Oh how they complained! Even to the point of rejecting God and desiring to go back to bondage where they could have the fish “that cost nothing, the cucumbers, the melons, the leeks, the onions, and the garlic.” (Numbers 11:5)

Despite the manna, they were consumed with a craving for meat. The Bible does not explain why they did not eat meat from their herds of sheep.

Moses finds the people’s complaining so hard to bear that he is ready to die if no solution is found, and his honesty with God brings about a Divine solution.

God tells him to gather 70 experienced elders to the Tent of Meeting. They are to share the burden of leadership, and to help them, God endows them with Moses’ spirit (Numbers 11:17). In Judaism, this act of God is seen to forever legitimate the judicial role of Israel’s elders.

God also promises Moses that He will give the people so much meat that they will be sick of it, which Moses finds difficult to believe. To satisfy the cravings of these ungrateful Israelites, God sends tons of quail. Many gorge themselves and die as God’s anger is unleashed due to their rejection of Him. They are buried at the place they named Kibroth-hattaavah (graves of craving). (Numbers 11:31-35)

Miriam and Aaron also complain by speaking against their brother Moses. They criticize Moses for marrying a Cushite woman, slander, and they want more respect as prophets in their own right, pride.

For speaking lashon harah (slander, but also speaking the truth to injure) and for pride, God strikes Miriam with leprosy; she turns white “like snow.” Aaron recognizes their sin and cries out to the Lord, “O God, please heal her, please.”

Although repentance helps restore our relationship with God, a lesson still has to be learned by Miriam, Aaron, and the entire community. They cannot move ahead until Miriam spends seven days outside the camp.

The prophetic reading this Shabbat (Zechariah 2:10-4:7) begins with an invitation to shout for joy because God will dwell in the midst of Zion and once again choose Jerusalem. In that day many nations will join themselves to the Lord. Zechariah’s vision confirms how deeply Adonai cares about the cleansing of His people.

The Prophet Zechariah sees the high priest Joshua, son of Jehozadak, standing before the angel of the Lord in the Heavenly Court.

Satan is also there accusing Joshua, who is clothed in filthy rags, a metaphor for sin. According to Rashi, Joshua is guilty of allowing his sons to marry foreign women, which is not allowed for Levites (see Ezra 10:18).

The Angel of the Lord identifies Joshua as a brand plucked from the fire, which an article on the Chabad website interprets as the “hardships of exile.”

Indeed, Joshua has returned from the Babylonian exile along with Zerubbabel and the Jewish exiles to Jerusalem where they will rebuild the city and the Jewish Temple.

The Lord rebukes Satan and says to Joshua, “See, I have removed your guilt from you, and you shall be clothed in [priestly] robes.” (Zechariah 3:4)

Zechariah then describes his vision of a seven-branched Menorah, which is kindled for the first time in this week’s Torah reading.

Rebuilding Jerusalem and the Second Temple is a huge task. And through the Prophet Zechariah, God reassures both Joshua and Zerubbabel that He is behind the initiative.  Immediately after Zechariah sees the Menorah, the symbol of purity and the light of truth reaching the nations, the Lord gives a word to Zerubbabel, the governor of Judah, saying, “Not by might, nor by power, but by My Spirit, said the Lord of Hosts.” (Zechariah 4:6)

Of course, pursuing spiritual goals is too difficult if we are left to our own devices. Both the Parasha reading and the Haftarah reading reveal that we have supernatural help.

We see that even Moses had his limits as a mere man. No one, not even Moses himself, could do the work of Moses without being anointed with the Spirit of God. To ease Moses’ burden, God spread some of Moses’ anointing, the Holy Spirit, giving it to 70 respected elders who would share in the task of leadership.

The Scriptures say that these elders immediately prophesied. When the Spirit of God is working in someone, spiritual gifts manifest. Prophecy is just one of these gifts (see 1 Corinthians 12:4-11, 28; Romans 12:6-8)

These gifts were only available to a select few until the Ruach (Spirit) descended on Shavuot (Pentecost) upon the first believers 50 days after Yeshua’s resurrection.

Through Yeshua, our garments of iniquity have been removed and we, like Joshua, are clothed in vestments of purity and righteousness. This is a fulfillment of one of Zechariah’s prophecies, which foretells of a time when the Messiah will remove all iniquity in a single day.

“I am going to bring My servant the Branch [a future king from the line of David] … and I will remove that country’s guilt in a single day. In that day — declares the LORD of Hosts — you will be inviting each other to the shade of vines and fig trees.” (Zechariah 3:8-10; Jeremiah 33:15)

This righteous Branch from the line of David has appeared; and in one day, He paid the penalty for our sin and clothed us with His righteousness.

Each of us need God’s Ruach in our lives, empowering us to obey His word, manifest His love, joy, and peace, and exercise spiritual gifts He has bestowed.

Filled with His Spirit, each of us are beacons of light that show the way to a lost and dying world. One practical way we can shine as lights in the midst of the darkness is by refusing to complain and, instead, express gratitude in all things, rejoicing in the Lord always.

“Do everything without complaining or arguing so that you will prove yourselves to be blameless and innocent, children of God above reproach in the midst of a crooked and perverse generation, among whom you appear as lights in the world.” (Philippians 2:14-15)