Welcome to this week’s Torah portion, which is called Acharei Mot (After Death).

“The LORD spoke to Moses after the death [acharei mot] of the two sons of Aaron who died when they approached the LORD.” (Leviticus 16:1)

Parasha Acharei Mot begins with God’s instructions for Aharon (Aaron), the Cohen HaGadol (The High Priest), regarding entering the innermost chamber of the Sanctuary, the Holy of Holies, with the ketoret (incense offering) and the preparations for the crucial once-a-year sacrifice on Yom Kippur (the Day of Atonement).

This week’s Parasha emphasizes that it is the blood that makes atonement for the soul.

“For the life of the flesh is in the blood, and I have given it to you upon the altar to make atonement for your souls; for it is the blood that makes atonement for the soul.” (Leviticus 17:11)

For most of us, even religious Jews, this idea of blood atonement for sin seems foreign and archaic. Moreover, in this day of do-what-you-think-is-right, even the basic concept of sin seems antiquated.

Still, Yom Kippur (Day of Atonement) is a reminder that the problem of sin is just as real today as it was in the time of Moses.

According to Jewish tradition, Yom Kippur is the day God pronounces judgment, administering either the rewards for good deeds (mitzvot) or the punishments for sin.

This holiest day of the year, which is observed in the Fall, reminds us that we are in desperate need of redemption through the blood of atonement. No matter how hard we try to be “good enough,” we always fall short of God’s standards of perfection.

“For there is not a righteous man upon earth who does good and sins not.” (Ecclesiastes 7:20)

The Scapegoat for Sin and God’s Sign of Acceptance

God told Moses that on Yom Kippur, Aaron should cast lots for two goats. One would be offered as the sacrifice and the other, the azazel (scapegoat), would be sent alive into the wilderness.

“Aaron shall bring the goat whose lot falls to the Lord and sacrifice it for a sin offering. But the goat chosen by lot as the scapegoat shall be presented alive before the Lord to be used for making atonement by sending it into the wilderness as a  scapegoat [azazel].” (Leviticus 16:8-10)

To symbolize the entire removal of the sin and guilt of Israel, the High Priest is to lay both his hands on the head of the live goat and confess over him all the iniquities of the children of Israel. All their transgressions are laid upon the azazel, which is then sent away into the wilderness.

“The goat shall bear all their iniquities to a land which is cut off.” (Leviticus 16:22) 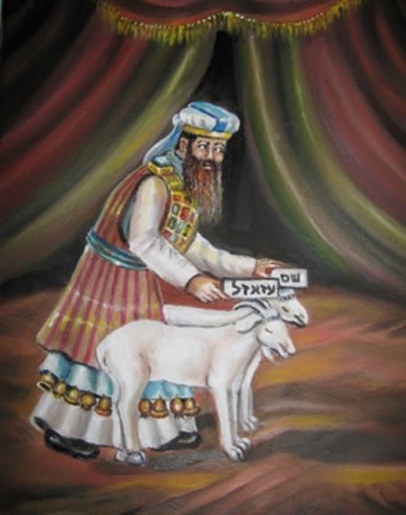 Rabbinic tradition states that the Cohen (Jewish priest) would tie a scarlet cloth to the horn of the goat. When the sacrifice was fully accepted by God, the scarlet cloth became white.

This symbolized God’s gracious promise in Isaiah 1:18: “Though your sins are like scarlet, they shall be white as snow.”

Tradition adds that this miraculous sign from God did not occur from about AD 30 to AD 70, at which time the destruction of the Second Temple by the Romans stopped all sacrifices.

God showed His acceptance of the azazel in the past, so why did He stop for these 40 years? Near AD 30, Yeshua made atonement for sin once and for all as the Azazel.

Yeshua became the Scapegoat for us, taking on Himself all of our sins and removing from us all the punishment that we deserve.

“By God’s grace, without earning it, all are granted the status of being considered righteous before Him, through the act redeeming us from our enslavement to sin that was accomplished by the Messiah Yeshua. God presented Him as a sacrifice of atonement [Kaparah] through faith in His blood.” (Romans 3:23-24)

The Removal of Sin

“In this way he [Aaron] will make atonement for the Most Holy Place because of the uncleanness and rebellion of the Israelites, whatever their sins have been.” (Leviticus 16:16)

While ordinary sacrifices were limited to atonement for involuntary or unintentional sins, the special Yom Kippur sacrifice of a goat also atoned for willful sin. The prophet Isaiah foreshadowed a day when Yeshua would become the sacrifice that would remove all sin.

In the Messianic prophecy of Isaiah 53, he wrote, “And the Lord has laid on Him the iniquity of us all … For He shall bear their iniquities.” (Isaiah 53:6, 11)

In Hebrew, the use of the word iniquities in these verses means crooked and signifies a willful departure from the law (Torah) of God. This prophetic portion of Scripture has been hidden from most Jewish people, even those who faithfully attend synagogue services. The entire chapter, in fact, is not found in the yearly selection of Sabbath Haftarah (prophetic) readings.

Why? Likely because it is impossible to miss that this Messianic prophecy describes the atonement that Yeshua made for us through the sacrifice of His own life.

Those who do read Isaiah 53 see the connection to Yeshua. Jewish anti-missionaries, however, downplay this important Messianic prophecy by claiming that these verses speak of Israel (not Yeshua) as a suffering scapegoat for the nations.

Of course, in a limited sense this is true. The nation and the people of Israel have suffered greatly. As a result of their rejection of the Messiah, salvation has come to the Gentiles; however, God has not forgotten them. He has only temporarily afflicted Israel:  “For I do not desire, brethren, that you should be ignorant of this mystery, lest you should be wise in your own opinion, that blindness in part has happened to Israel until the fullness of the Gentiles has come in. And so all Israel will be saved, as it is written: The Deliverer will come out of Zion, and He will turn away ungodliness from Jacob; For this is My covenant with them, when I take away their sins.” (Romans 11:25-27)

Numerous rabbinic commentators acknowledge that Isaiah 52:13-53:12 does refer to the Messiah and not to the nation of Israel, such as these:

“He, Messiah, shall intercede for man’s sins, and the rebellious, for his sake, shall be forgiven.” (Jerusalem Targum on Isaiah 53:12)

“… and when Israel is sinful, the Messiah seeks for mercy upon them as it is written, ‘By his stripes we were healed’ (Isaiah 53:5), and ‘he carried the sin of many and made intercession for the transgressors’ (Isaiah 53:12).” (Genesis Rabbah)

In addition to writings in ancient Jewish literature, other respected Rabbis have objected to the idea that Isaiah 53 refers to the nation of Israel. Rabbi Moshe Kohen ibn Crispin (15th century) wrote these strong words: “[In contrast to those] having inclined after the stubbornness of their own hearts and their own opinion, I am pleased to interpret the parasha (Isaiah 53) in accordance with the teachings of our rabbis, of the King Messiah… and adhere to the literal sense. Thus I shall be free from forced and far-fetched interpretations of which others are guilty.” (S.K. Driver and A. Neubauer, The Suffering Servant of Isaiah, p. 199ff)

Rabbi Moses Alshech (16th century) stated flatly: “Our rabbis with one voice accept and affirm the opinion that the prophet [Isaiah chapter 53] is here speaking of the Messiah.”

Through faith in Yeshua, our sins are transferred to the Messiah, who became our Scapegoat (Azazel).

Only His death fulfills Isaiah 53, which describes God’s Suffering Servant, who like a lamb was led to the slaughter to bear our iniquities. And because He was sinless, Yeshua came into the heavenly Holy of Holies in the capacity of the High Priest (Cohen HaGadol), not with the blood of bulls or goats, but with His own blood for our redemption.

“He did not enter by means of the blood of goats and calves; but He entered the Most Holy Place once for all by His own blood, having obtained eternal redemption.” (Hebrews 9:12)

The blood of bulls and goats could never fully remove sin, only cover it for a time.

Only Yeshua the Messiah, as the pure spotless lamb and the scapegoat, could pay the price for our rebellion and uncleanness. He did so willingly, giving His life as the Korban (sacrifice) for our sins.

“Surely He has borne our griefs and carried our sorrows; yet we esteemed Him stricken, smitten by God, and afflicted. But He was pierced for our transgressions; He was crushed for our iniquities; upon Him was the chastisement that brought us peace, and with His wounds we are healed.” (Isaiah 53:4-5)