Welcome to Parasha Miketz (At the End), this week’s Torah Portion.

Because this Shabbat (Sabbath) falls during the eight-day holiday of Hanukkah, it is called Shabbat Hanukkah.

We know you will be blessed as you study with us the portion of the Torah that will be read in synagogues around the world during this week’s Shabbat (Saturday) service. 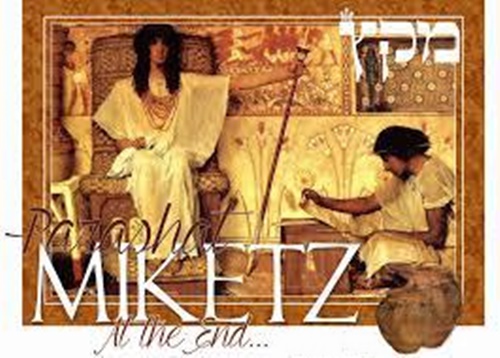 Miketz (At the End)

“And it came to pass at the end of [miketz] two full years, that Pharaoh dreamed a dream: and, behold, he stood by the river.” (Genesis 41:1)

In last week’s study, Joseph’s brothers became jealous of him, plotting against him because his father favored him above his other sons and because his prophetic dreams revealed his own grand destiny. So they threw Joseph into a pit and then sold him into slavery. While serving honorably as a slave, Joseph was falsely accused and sent to prison for a crime he didn’t commit.

In this week’s reading, Joseph is finally about to come to the end of his many trials and enter into his grand destiny. In fact, the name of the Parasha, Miketz, found in the opening verse of this week’s Torah reading, hints at this since this Hebrew word means at the end of.

Joseph is brought out of the darkness of an Egyptian dungeon to interpret the strange dreams of the Pharaoh. In just one day, Joseph is promoted from prison to palace, and his life was suddenly transformed from darkness to light.

A Light in the Darkness

Because Miketz coincides with Hanukkah or the Festival of Lights this year, this week’s portion includes a special Haftarah (prophetic reading) about the prophet Zechariah’s vision of a grand Menorah. He says,

“He asked me, ‘What do you see?’ I answered, ‘I see a solid gold lampstand with a bowl at the top and seven lamps on it, with seven channels to the lamps. Also there are two olive trees by it, one on the right of the bowl and the other on its left.’” (Zechariah 4:2-3)

Two olive trees feed this grand Menorah with oil. The trees are often considered to refer to Joshua the High Priest and Zerubbabel, religious and political figures.

But since prophecy usually reveals the present and future, and since trees in Scripture often represent people, these two trees are seen by some to represent Jewish believers and Gentile believers, anointed sons who have been shining light into the darkness for over 2,000 years.

Others think the two trees represent the Messiah (the Lord’s Righteous Branch) and Ruach HaKodesh (Holy Spirit) who are “anointed to serve the Lord of all the earth.” (Zechariah 4:14)

Zechariah promises that the darkness that comes from our sin, which separates us from God, will be supernaturally lifted in a single day by His Righteous Branch.

We saw this prophecy fulfilled when in a single day, the sacrifice of Yeshua took away the sins of the world: “We have an advocate with the Father, Yeshua HaMashiach (Jesus the Messiah) the righteous; and He is the atoning sacrifice for our sins, and not for ours only but also for the sins of the whole world.” (John 2:1-2)

God also speaks of the supernatural working of the Ruach (Holy Spirit) to accomplish the Lord’s plans, such as the building of the Second Temple by Zerubbabel: “This is the word of the LORD to Zerubbabel: ‘Not by might nor by power, but by My Spirit,’ says the LORD Almighty.’” (Zechariah 4:6)

In the Holy Sanctuary, the light of the Menorah became a symbol of God’s Divine Presence; its light not only lit up the inside of the Temple, but tradition says it also shined out the windows and into Jerusalem where people could bask in its rays during the dark nights.

During this time of year, when the winter nights are the longest, we sense our need for light more intensely.

Some people even experience what has been termed S.A.D. (Seasonal Affective Disorder), a particular depression brought about by a deficiency of sunlight. Likewise, when we are going through our “long, dark night of the soul,” we feel more intensely our desire to see even a glimmer of light.

The Hebrew prophet Isaiah wrote of a “Great Light” that would one day come to lift people out of the gloomy darkness: “Nevertheless the gloom will not be upon her who is distressed …  The people who walked in darkness have seen a great light; those who dwelt in the land of the shadow of death, upon them a light has shined.” (Isaiah 9:1-2)

Who is this “great light” of which Isaiah prophesied? The Light would come in the form of a child, who would eventually rule the nations in righteousness and justice, seated on the throne of His father, David, for all eternity.

“For unto us a Child is born, unto us a Son is given; and the government will be upon His shoulder and His name will be called Wonderful, Counselor, Mighty God, Everlasting Father, Prince of Peace. Of the increase of His government and peace there will be no end, upon the throne of David and over His kingdom, to order it and establish it with judgment and justice, from that time forward, even forever.” (Isaiah 9:6-7)

Yeshua HaMashiach (the Messiah-the Anointed One) said, “I am the Light of the World. Whoever follows Me will never walk in darkness, but will have the light of life.” (John 8:12)

Light of the World

Hanukkah is a celebration of light.

It was both a physical salvation and a spiritual one, since the Jews were not only rescued from persecution, but also liberated from an enforced Hellenized (Greek) religious system and culture.

They fought for freedom to worship the One True God, to keep His commandments, and to observe the festivals as written in the Torah. Though not commanded in the Torah, the Jewish people honor the liberation of the Holy Temple and its rededication to God by celebrating the Festival of Dedication / Hanukkah.

Did Yeshua celebrate Hanukkah? The only reference in Scripture to Hanukkah is found in the Brit Chadashah (New Testament), and it indicates that He more than likely kept the festival.

The Gospel of John reveals that Yeshua walked in the courts of the Temple during Hanukkah:

“Now it was the Feast of Dedication in Jerusalem, and it was winter. And Yeshua walked in the Temple, in Solomon’s porch.” (John 10:22-23)

While He was there, some asked Him directly if He were the Messiah. Yeshua pointed to the works He had done as proof, but explained that they did not believe in Him because they were not His sheep.

In this week’s Brit Chadashah portion, Yeshua the Messiah proclaimed His mission as one of healing the brokenhearted and setting captives free. The verses He cited came directly out of the book of the Hebrew prophet Isaiah.

“So He came to Nazareth, where He had been brought up. And as His custom was, He went into the synagogue on the Sabbath day, and stood up to read. And He was handed the book of the prophet Isaiah. And when He had opened the book, He found the place where it was written: “The Spirit of the LORD is upon Me, because He has anointed Me to preach the gospel to the poor; He has sent Me to heal the brokenhearted; To proclaim liberty to the captives and recovery of sight to the blind; To set at liberty those who are oppressed; To proclaim the acceptable year of the LORD” (Luke 4:16-19; see also Isaiah 61:1)

Yeshua and Yosef (Jesus and Joseph)

Many parallels can be drawn between Yeshua and Joseph.

At the time of Joseph’s release from prison into the service of Pharaoh he was 30 years old, just as Yeshua was 30 when he began His public ministry in the service of the King.

Also, Joseph’s appearance and personality had been so changed during his time in Egypt that his brothers no longer recognized him.

They stood right in front of Joseph, seeking the salvation from their famine that only he could provide, and yet they had no idea he was their brother.

Likewise, Yeshua’s Jewish brothers and sisters today hold in front of them the Scriptures that reveal who He is, and yet they are unable to recognize Him as their Jewish Messiah.

Yeshua’s identity has been so changed that the great majority of Jewish people cannot fathom that this “Jesus” could possibly be the Jewish Mashiach (Messiah) for whom they have been waiting, longing and praying for over 3,000 years.

Nevertheless, the prophet Zechariah told us that one day, all the Jewish people will recognize Him: “And I will pour out on the house of David and the inhabitants of Jerusalem a spirit of grace and pleas for mercy, so that, when they look on Me, on him whom they have pierced, they shall mourn for Him, as one mourns for an only child, and weep bitterly over Him, as one weeps over a firstborn.” (Zechariah 12:10)

Today, thousands of Yeshua’s brothers and sisters are coming to understand who He truly is: they are known as Messianic Jews and their search for the Messiah of the Scriptures has ended.

These “completed Jews,” as some call them, are steadily gaining recognition as a legitimate sect of Judaism in Israel and in the world.

Please pray that the reset of the Jewish people will recognize Yeshua (Jesus) in Zechariah’s Messianic prophecy as they hear about the Righteous Branch and the promise that sin will be removed in a single day.

Then they, too, may rightfully call themselves completed Jews!

On this Festival of Dedication, please also consider sending a special gift to help set the captives free from sin. Your gift shines a light in the darkness by helping us explain the Messianic prophecies to the Jewish people.

To listen to our Shabbat service for today, please click on the link below:

To watch a video of the sermon in English and Italian, please click on the link below: